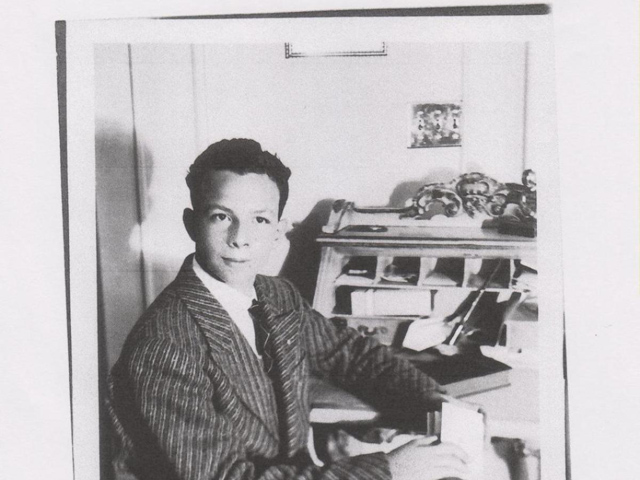 Ask me for my favorite Thanksgiving story and here’s what I’ll now have to tell you.

In 1930, a certain 4-year-old in Newark had yet to speak a single word. So his mother took her first-born son to see a series of physicians for a diagnosis.

It turned out that my future father had been born almost completely deaf.

Two of those doctors recommended sending Lee Brody to a private school, the Central Institute for the Deaf (CID), a kind of Harvard for deaf children, more than 800 miles away in St. Louis, Mo.

My grandparents, despite such heavy expense during the depths of the Great Depression — my Poppa ran a saloon — took that advice.

My father arrived at CID in 1931 and graduated in 1941. There, he learned to speak, to listen, to read lips and to function as well as any hearing person. That much I knew.

But then, two years ago, some old letters arrived in my sister’s mailbox, and from an unlikely source: the woman my father had lived with after he divorced my mother. We’d had no contact with her in the 18 years since my father died in 1997. Our family had long presumed such letters to be either non-existent or long lost.

One of the letters revealed a reality about my father that I neither knew nor ever had cause to suspect. In 1936, with my father now 10 years old and already five years into his stay at CID, my Poppa ran out of money to foot the bill. My father was pulled out of his classes to return to Newark and enroll in a public school.

My Nana then evidently wrote a letter to Dr. Max Goldstein, the prominent ear, nose and throat physician who had founded CID in 1914 and served as its executive director. She informed him that her son was performing poorly in the new school and pleaded for the institute to accept him back.

In response, Dr. Goldstein wrote, “I can readily appreciate your own disappointment in his limited progress (in Newark) . . . and your satisfaction with Irwin’s progress while with us.” She had “made a very frank statement of your family’s financial affairs.”

Dr. Goldstein then agreed to lower the annual tuition fee for my father to $900.

“I hope this concession in the tuition fee will make it possible for you and Mr. Brody to have Irwin return to CID next September,” he wrote, “for I know it will be for the child’s good and will contribute much to your happiness.”

As a result, my father returned to CID the following semester and stayed there for five more years. He would graduate from Weequahic High School in Newark, and then from Rutgers, among the few deaf students ever to do so.

Much later, my father — now age 42, with a wife, two children and a full-time job managing real estate — founded a nonprofit organization, New York-New Jersey Phone-TTY, headquartered in Hackensack. Partnering with IBM and AT&T, among others, he was instrumental in establishing a network of specially adapted teletypewriters, or TTYs, from coast to coast.

As a result, millions of people with hearing impairments could, in written messages transmitted instantaneously, “speak” with each other as never before. The TTYs also connected the deaf and hard-of-hearing for the first time to police stations, firehouses, hospitals, airports and government.

Later, my father received a personal letter of appreciation from then-President Ronald Reagan. Bell Telephone’s Pioneers Club inducted him as only its 29th member since 1911. The Stevens Institute of Technology held a memorial service in his honor that drew 500 mourners. Gallaudet University, the world’s only higher education institution for the hearing-impaired, named a scholarship after him.

My father confided to me more than once throughout my boyhood that without his education at CID, he might never have accomplished much of anything. And he often expressed his gratitude, justifiably so, to his parents for funding it all at considerable sacrifice. No doubt he learned only later about the letter his mother sent to CID arguing her case for his return.

And so a certain question now haunts me. What would have happened to him without Dr. Goldstein’s altruism? We’ll never know. So, in keeping with the spirit of Thanksgiving, Dr. Goldstein, I thank you. As a pioneer in education, you made possible a pioneer in communications. I thank you for seeing the future in my father.

This article was originally published on NYDailyNews.com. Bob Brody is the author of the new memoir, “Playing Catch with Strangers: A Family Guy (Reluctantly) Comes of Age,” and you can read more about him here.