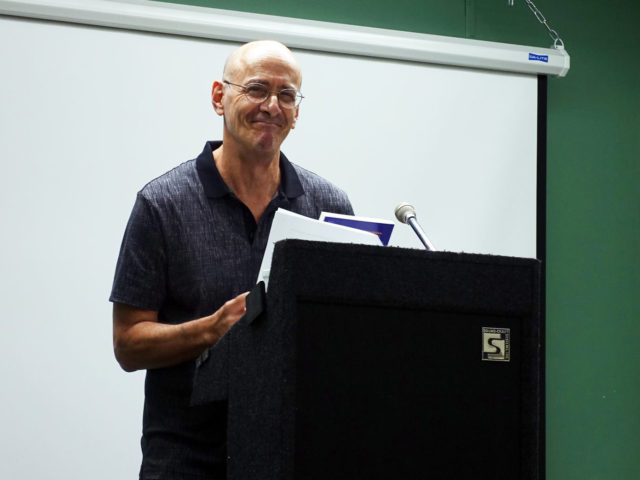 Bob Brody speaking at his book signing for “Playing Catch with Strangers” at the Forest Hills Library on September 16, 2017. (Courtesy Bob Brody)

In “Playing Catch with Strangers,” an essay published in The New York Times in 2015, Bob Brody writes that he played catch with his father only once in his life.

“That summer afternoon, I felt about as happy as I’d ever felt. That’s how it goes when you’re 8 years old and playing catch with your dad,” writes Brody. “But then my father got busy with work, too busy to play catch with me anymore, always leaving early in the morning and returning late at night, and that turned out to be that. He had to do what he had to do.”

Although short-lived, that special day ignited a flame in Brody’s life that would never extinguish – one that would continually remind him the importance of having fun and nurturing relationships throughout his life. In addition to becoming a public relations executive and a writer, Brody, now 65, still makes it his joyous duty to play catch with anyone who is interested.

His memoir, comprised of the many personal essays he’s written throughout his life about family and special moments, is similarly titled, “Playing Catch with Strangers: A Family Guy (Reluctantly) Comes of Age,” and hit shelves this past June.

“My new book covers my whole life…It’s a celebration,” says Brody. “It’s about my struggle to overcome immaturity. I resisted responsibility for a long time…It wasn’t until I was 35 [when my daughter was born] that I developed a real hard work ethic.”

He says his whole life he’d only wanted to be a writer.

“That ambition took shape when I was 12,” recalls Brody, who ended up writing for his junior high, high school, and then college paper. “My grandfather bought me a New York Daily News subscription so I could read about the Yankees. I appreciated the directness of the language. I really didn’t get serious about writing till I was 18 – in college. Writing for the school paper, I became infatuated with words. I was not much of a storyteller at that point. I was just looking to see what I could do with language. I used to use big words – words that I will probably never use again. I’ve come to recognize short words can be good, short sentences can be good…I like street language too.”

He says if he had to do it all over, he really doesn’t know what else he could’ve become.

“I guess I could’ve become a lawyer, but then I would’ve written about being a lawyer,” says Brody, smiling.

Born in the Bronx, Brody lived there almost three years before migrating to the suburbs of Fair Lawn, NJ. He was always smitten with NYC, however, as he would often sleep over his grandparents’ house there, and his grandmother would take him to all the museums and concert halls, including Radio City Music Hall.

At 23, after majoring in English at Fairleigh Dickinson University, he moved to Manhattan. This momentous occasion also led to his proudest career moment at 26 – getting published in The New York Times.

“I wrote about the time I got mugged five weeks into living in New York City,” laughs Brody, who has since lived in Forest Hills, Queens for the past 40 years.

Since his big break, Brody’s work has appeared in publications such as The Atlantic, The Washington Post and The Wall Street Journal, and more. He also wrote the book, “Edge Against Cancer,” which profiles 12 athletes who survived cancer and were able to return to competing in their respective sports.

He says it was when his son and daughter were born that he realized he needed to find another source of income.

“The only option I considered was public relations, because a lot of it is writing,” says Brody, who has now worked in PR for the past 26 years. “I majored in English, but I never trained for public relations. It was a tough adjustment, because for one, I was used to working on my own. I was used to being a solo act. When you work for a public relations firm, I had to learn how to be a teammate.”

“My ideal life would be to write whatever I wanted for at least three hours a day, but I think PR is good for me,” says Brody, adding that he usually enjoys writing first thing in the morning. “If I had to write only what I wanted, I might get sick of my own voice.”

His first love will always be writing essays though. The very first short story he wrote was about a haunted house when he about 8, and currently, he writes approximately 20 essays a year.

“I love telling a story that’s going to hit people where they live – make them smarter, or get them excited about something,” says Brody. “If I can write anything inspirational, that’s the holy grail. I also like the sense of control. It’s me and the blank screen. Me and the words, and how I want to tell the story. It’s fun to get published. I write to be read. All these years later, and I still never get tired of it.”

He says his five year plan entails writing three more books — the first being called, “Letters to My Kids,” of which he already started an online blog (where he urges others to also write journals to their children), another would be a memoir honoring his deaf parents, and the last would be a memoir about working in public relations.

“When I’ve written about something, I really feel like I’ve lived it,” says Brody about the necessity he feels to document his life with words. “I think I have much of it there in my new book– and it’s about the people closest to my heart.”

There are two pieces of advice about life he’s learned thus far that he would’ve liked to share with his younger self:

“On family – I wish I knew years ago what family means to me now,” says Brody. “I feel I failed early on to realize the importance of family. In some respects, I’m too late and in some, I’m just on time…and work harder. You have less time than you think. The world is never going to come to you so take nothing for granted.”