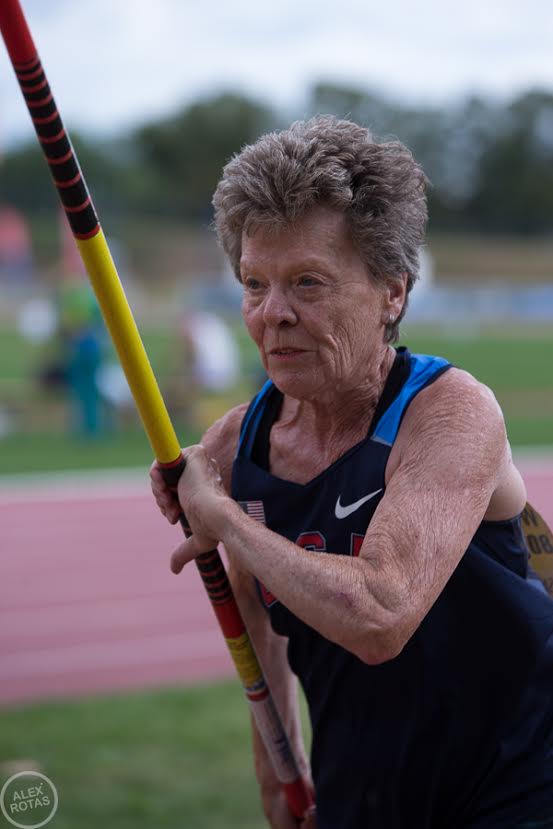 Flo Meiler may be 81, but she’s still at the top of her games. She actually competed in 18 different sports last month at the World Masters Athletics Championships in France, added three new world records to her 15, including one new American record in the triple jump and one in the heptathlon.

Meiler grew up on a dairy farm in a small community in Champlain, NY.

“I was always very active in high school,” recalls Meiler, now the oldest pole vaulter in the world. “I played basketball, I was a cheerleader, I took tap dancing lessons, I was a baton twirler, I played trumpet. I was in everything. I was always a go-getter.”

Today, she lives with her husband of 55 years in Shelburne, Vermont. They moved around a lot throughout their marriage as he was a B-52 bomber pilot in the military.

“We were stationed in Orlando, Florida for 3.5 years, and we did a lot of water skiing competitions there,” says Meiler, who ended up taking part in more than 30 years of waterskiing competitions. “That strengthened my legs and arms a lot.”

Together with her husband, she took up tennis at age 40, and now they enjoy ballroom dancing. Independently, she started competing at the Vermont Senior Games at 55, and she didn’t start track and field until she was 60.

“I was playing tennis with my husband, and my training partner asked me to try track,” remembers Meiler. She said, ‘I think you’ll be good at it,’ so I did it, and that’s what started my track and field career.”

Out of all the sports she competes in, she says the pole vault and the hurdles are her favorites, “because they are very challenging, and I’ve always loved anything challenging.” 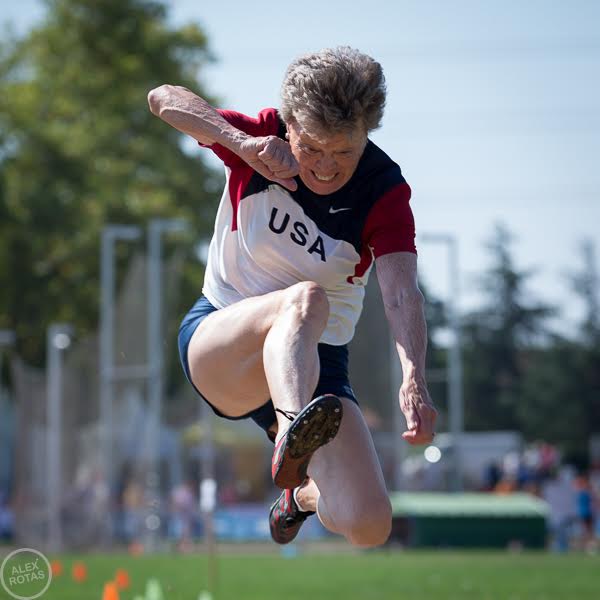 She says she owes a lot to her training partner, and advises others to get one if they want to get serious about getting fit.

“I am very fortunate to have Barbara Jordan with me, because we challenge each other,” says Meiler. “When we compete, we’re the best of friends. We do the best we can. Two years ago, she had a mastectomy, and they took out part of her left lung. I call her my angel. If she wasn’t as fit as she was, she could not have [survived]. Fitness really counts when it comes to health.”

Meiler says she’s taking it easy now – training only an hour and a half, six days a week, instead of two and a half. Her next competition isn’t until January – the Dartmouth Relays in Hanover, New Hampshire, which she’s been doing for the past 15 years.

One of her life’s biggest challenges has been personal, however.

“I had the misfortune of having two miscarriages,” says Meiler. “In those days, they didn’t have the medical equipment they had today. I also had a 3.5-year-old who died from aplastic anemia. Then we adopted three children – a 3.5 year old from Vermont, then another 2.5-year-old boy from Canada, and a 5.5-year-old from Korea. We have an international family. We all played tennis together, and did waterskiing.”

What’s one piece of advice about life that she would tell her younger self with the wisdom she has now?

“Not everybody has had the opportunity that I had. I married a fantastic husband, and he was able to provide. I didn’t have to go to work, but I kept busy with doing something for the community – I volunteered for the American Heart Association for 27 years. If you’re not going to be working, you really should be doing something for your community,” says Meiler. “Don’t rest on your laurels. Keep active…be active in your church, be part of your community, take real good care of your family, and put the good Lord first in your life. He has really helped me in my life.”