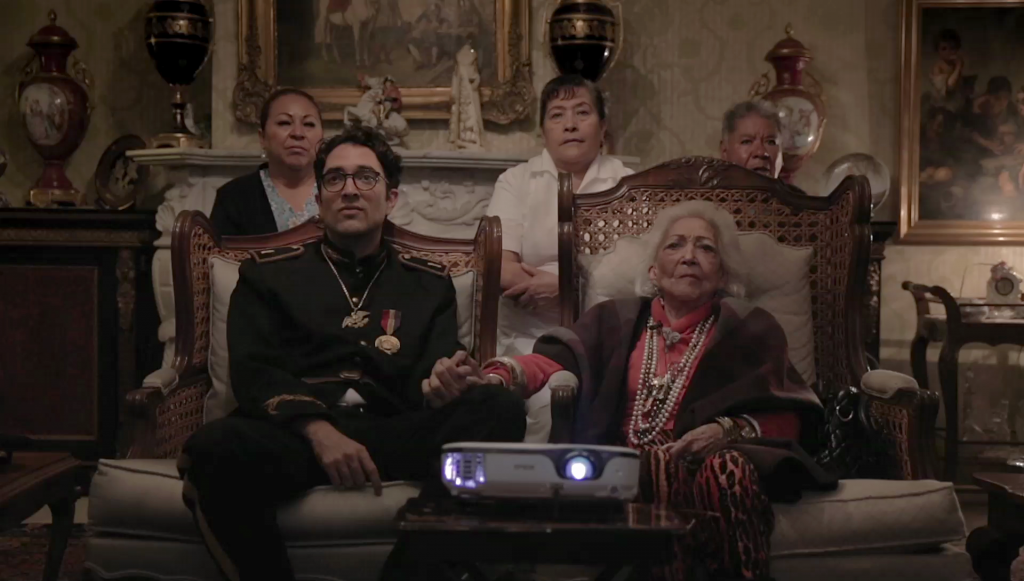 It was a chilly October night when “Mamacita” had its New York premiere at the Margaret Mead Film Festival at the American Museum of Natural History. However, Mexico-born and raised filmmaker/director José Pablo Estrada Torrescano warmed the auditorium as he announced his first feature-length film – a documentary about his grandmother, a self-made entrepreneur who proudly created an empire in Mexico’s beauty industry.

“I made it with my heart – struggling, sweating…” said Estrada Torrescano, 37, on the stage.

In the film, he also mentions a painful period in his life when, at 13, his mother passed away, and because of that, he lived only with his two brothers who were 16 and 18 years old. During this time in his life, he says he felt alone and abandoned by the rest of his family. Little did he know that embarking on this filmmaking experience would lead him to encountering some much needed personal inner-healing, as well as to establishing a bond with his usually emotionally distant grandmother.

Here is a Q & A with Estrada Torrescano about how making this film ended up being a life-changing experience for him, as well as for his grandmother (who turned 100 today):

What made you decide to make a film about your Mamacita, and how long did it take to complete?

Before leaving Mexico City to study film in Prague, I told my family during a Christmas party that I was quitting mathematics, after it being my profession for 10 years, in order to follow my heart and study film. My grandmother, Mamacita, was very excited about it and made me promise to make a film about her life. I didn’t take it seriously at the moment, but after finishing my studies, I didn’t know what to do, so I told my professors about Mamacita’s life, and their reaction was amazing, so I finally decided to do her film. This was six years ago! The film took all these years to be finished, since I did it completely independently. At the moment of shooting, I decided not to have a script, or anything to guide me, except my intuition…I managed to get the resources to shoot thanks to a crowdfunding campaign…We managed to premiere “Mamacita” at HotDocs in Toronto, and even received the Top Audience Pick…

What really stood out to me in your film is your focus on the concept of forgiveness. Why was this important to you? And what made you realize this is what Mamacita needed to do?

Since everything was made intuitively, I didn’t know that forgiveness was going to be part of the film. Life just guided me in that direction. It was what was needed to be done, and I just did it… Now that I see things behind, and the fact that I managed to forgive Mamacita and my family, it has been crucial for my own development. And after having experienced that, I want everybody to know that forgiveness is the key! Would you imagine a world where we have all forgiven our family, friends and even our enemies? Where we have managed to let go all our regrets, our pain, our suffering? That would be paradise! And we could achieve it, if we would have the courage to confront our internal world without judging it – just seeing it, learning from it, understanding it. Being open to knowing that what others have done to us is because of their own ignorance and limitations – ignorance and limitations that we also have! We might not have the same limitations, but our own. And if we accept that, if I forgive myself for having them, then I can forgive others for having them as well.

Did the forgiveness element of the film take place at the end of your stay?

Yes, “the secret thing that I did” to Mamacita for her to achieve forgiveness was in the end of my 3-month stay in Mexico City. It took me a long time to decide to do “it.” When Mamacita sensed that I was doubting, she said, “You know José Pablo, there are times when one needs to take a risk and do things,” so I took it as an invitation and did it.

Do you think she has had a healing experience? How would you describe how she changed?

I think that the whole process of doing the film was a healing experience for her. Before arriving to Mexico to shoot, Mamacita –who was 95 years old at that time– was constantly in a really bad mood. She was continuously fighting with her daughters, and with the people who work for her in her house. But having a camera in front of her, and somebody doing a film about her, made her so happy. She was the best person to work with! When I left Mexico, her daughters and the rest of the family started to come to eat at her house with her everyday, like in the old times. Mamacita is super happy now that her film is being seeing all around the globe in festivals.

What about for you? How did this whole experience change/heal you?

This has been possibly the best thing that I’ve done in my life. It was a life-changer. Not only because now I am a filmmaker, and have some kind of success, but most importantly because of having achieved forgiveness. For me to having forgiven my family was a HUGE thing, but it was not easy at all!

After finishing the editing of the film, I had to confront many feelings that came out after more that 20 years of being repressed. This was probably the most difficult thing that I have experienced in my life. Those three months were like being in hell, and I’m not exaggerating. But after the worst night of them all, I woke up as if I was in paradise! All the terrible feelings just came out of my system, and peace and bliss were there now. I even thought that I was going to die. Anyhow, I’m just telling all this very personal stuff so more people dare to confront their fears, confront their pain. Look at yourself as you really are, learn from yourself, without judging.

What is the most important thing do you think you learned from your Mamacita?

Mmm…The logline of the film is “It’s never too late to forgive,” and just now, thanks to your question, I understood that’s the most important thing that I’ve learned from my grandmother, Mamacita.

This interview has been edited for brevity and clarity.