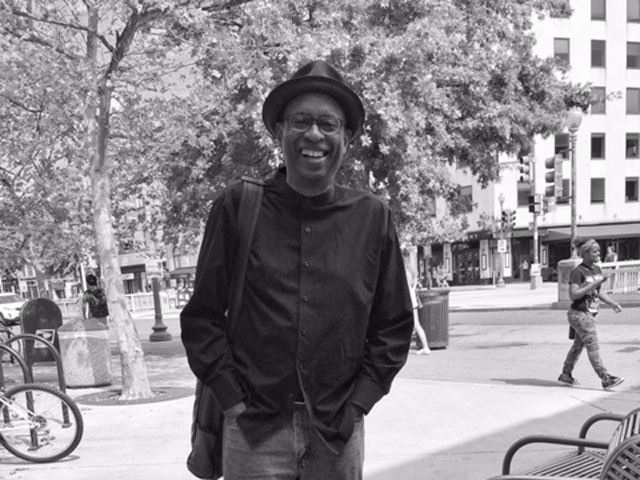 Eugene Ethelbert Miller, who goes by his middle name, “Ethelbert,” is a writer and literary activist who says he’s never been busier than at 66.

Originally from the Bronx, NY, Miller made his way to Washington, D.C. to attend Howard University at 18. He’s been residing in the U.S. capitol ever since, where he’s written several collections of poetry, two memoirs and where he has served as editor of America’s oldest poetry journal, “Poet Lore.” His most recent book, “The Collected Poems of E. Ethelbert Miller,” hit shelves last year.

The award-winning poet also loves to discuss history and politics, and thus currently hosts and produces half-hour segments with experts in different fields, called, “The Scholars” on UDC-TV, and is the host of the weekly morning radio show, “On the Margin,” which airs on WPFW-FM 89.3.

“I made the decision to be a writer my sophomore year [of college],” recalls Miller. “I arrived to Howard University in 1968 – the year Martin Luther King, Jr. was assassinated, and then following that, Robert Kennedy was assassinated in June. The Vietnam War was going on – 1968 was one of the most important years in world history.”

He says it was during this time that he was “sort of baptized in black history.”

“I wanted to be involved in every aspect of writing about it,” says Miller about the politically-charged time, as sharply and energetically as if it were just yesterday. “It was just like now – with the Woman’s March and Black Lives Matter…”

He remembers writing his first poems on the back of envelopes on his letters to family back in NY – his favorite topic being love.

“I wrote many love poems,” says Miller. “I wanted to leave behind poems that were similar to Pablo Neruda’s work.”

Eventually, his poems made it to the school newspaper, and then a DJ started to read his poems on Howard’s school radio.

“Last year, my collective works came out,” continues Miller. “Now I can hold in my hand a body of work that represents 40 years.”

As the first member of his family to go to college, he considers this quite the accomplishment.

“My family is from the West Indies,” says Miller. “My father worked in the post office, my mother was a seamstress. College was a strain financially, and when I said I wanted to be a writer, it took them a while to understand.”

However, he has no regrets on his career choice.

“When I look back on my writing, it took me to places that I couldn’t have gone otherwise,” says the poet, mentioning the U.S. State Department sponsored some of his trips. “I went to Iraq, Saudi Arabia, people would send me to all sorts of places.”

Miller also spent 40 years as director of the African American Resource Center at Howard University, where he was able to give back to an institution that has given him so much.

“I was one of the first graduates of African American Studies at Howard University,” says Miller, explaining it was one of the first schools to offer this program in history. “Howard students pushed for the African American Studies Department, and the Ford Foundation gave a large grant to set up the department, and part of it was the Resource Center.”

Miller started out as a student at the Resource Center, and then became a director in 1974. He describes it as a place with a lot of books, and a base to document African American history.

“I made a lot of contacts working there – there’s probably no African American writer I don’t know,” says Miller, remembering the memorable time Alex Haley, the author of “Roots” and “The Autobiography of Malcolm X” came to meet him there. “A lot of people came through that program. When you stay at a place 40 years, you are going to touch a lot of lives, and a lot of lives are going to touch you.”

However, about two years ago, Miller says budget cuts shut down the program, and he was let go.

“You might have three, four, or five professions in your life. I worked in a place for 40 years. That way of life is not coming back,” says Miller about the changing times. “Now, you’re most probably not going to marry your high school sweetheart. [And that] redefines what family really is.”

Miller says one of his most challenging roles was being a father and raising two kids. And even in fatherhood, the way he used language was intentional – even in naming them.

“I’m a baseball person, and I look at my life in terms of innings – now, I’m going through the 7th inning stretch,” explains Miller. “When you reach your 70’s, you still have your life ahead of you. Jazz musicians are still performing in their 80’s, and that should be a guide for all of us. As an artist, you are not dependent on an employer. [Your art] never stops until you die.”

Right now, he says he’s doing better than ever, and it’s the busiest “inning” of his life.

“Before, I was not making a living as a writer. I was never applying for grants and fellowships, but now I am free to travel and write more,” says Miller. “My career has really taken off. I finally have an assistant. She edited my collected works, which would never have happened if I was with the University. It made me very, very productive. Some people think I don’t sleep.”

He’s also been the board chair of the Institute of Policy Studies for the past 10 years (currently the interim chair) – a progressive think tank working to build social, cultural and economic equality.

“I chose the board – I moved our organization to a new facility. I put Danny Glover on our board, and Harry Belafonte,” says Miller, adding they discuss things from domestic workers to healthcare issues. This is the first year that I know personally well two members of Congress. Some of those people I’ve met through the Institute. People associate me with literature, but I’m also involved in politics. My day has a lot of projects – I’m doing a tour of the south right now – going to all the black schools with my friend, a filmmaker. Just came back from New Orleans, and next we are heading to Tuskegee in Alabama. There’s a lot to do – a lot of collaborations. Being a writer, you’re not just concerned about what’s going on in the U.S. but all around the world. That’s how you should live your senior years. If you stay healthy, you can make a contribution…What we need today is heroes.”

What is the most important piece of advice about life that you would tell your younger self knowing what you know now?

“I think what I’ve learned now are two things: We have to practice deep listening. We have to understand what [people] are afraid of, what they’re suffering from. Then the next level is compassion. Once you get past that point of compassion, then you can talk about the beloved community. There are levels. You have to prepare yourself spiritually for the steps…Every day when you wake up, fix something that’s broken. That way you know there’s going to be something different between today and yesterday. That’s how you know…You gotta make some changes, and it might be very small. Sometimes the first thing you gotta fix is your heart…When I look at my love poems, they’re always about desire and seeking. If you can in your life have one good friend, then you have done something that is very, very difficult, because you have to love that person with all their flaws. It takes a strong spiritual point of arriving, too – that level of love is what we’re really lacking in society. We are losing that with our young people – we’ve gotta bring caring and civility back. I see people yelling at each other and no deep listening.”