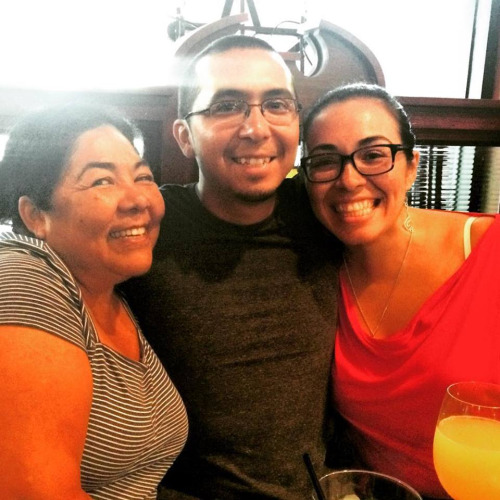 Belgica with her children the day before surgery.

On July 27th, the company I now work for had told me they’d call me back shortly with a final offer. I was beyond excited. Moving back to NYC had been my dream for years. It was all finally happening.

As I waited for the phone call, I was in my kitchen cooking, and my brother called. I had him on speakerphone, and he told me to take him off, which I found odd. He proceeds to make small talk with me and then tells me we have to talk and I should sit. He then tells me, “Mom’s results came back positive…for cancer.”

This all started a few months back when my mom starting showing ONE symptom. She’s good about going to the doctor – so she went and got some tests done. In the past, she had shown a similar symptom and everything came back normal, so I didn’t worry.

When my brother told me, I didn’t really know what to say besides, “Ok…” I work in a business where you deal with tragedy every day. If it’s not a mass shooting, it’s a natural disaster, or war. You learn to not let things sink in, because you don’t have time. You need to crank out a script, and inform everyone else. There’s NO time to feel.

My brother was very supportive and told me he was going to let me go, but if I needed anything to call him. He’s always the family rock. In serious situations, our (my mom and I) feelings come first. As a matter of fact, when my mom told him her diagnosis his response to her was:

I did ask him why he was the one telling me. He said my mom didn’t have the heart to tell me, so he told her he’d handle it. I hung up the phone and just sat there. I did what my instincts always tell me to do, call my best friend, Valerie. She was at work, and when she answers the phone the idea of saying the words made my voice crack.

“My mom has cancer.”

After I hung up with her, I composed myself and called my mom. She told me she was diagnosed with endometrial cancer, or endometrial adenocarcinoma. Your endometrium is the lining of your uterus. The symptom my mom had was something we women would’ve blamed hormones for, except at her age it’s not.

My next concern was the fact she was heading home to an empty house. When I told her, she said she had already called my other best friend, Ignacio, who’s like a younger brother, to go to the house. I called him to give him the heads up. He knew she had been getting tests done and had even taken her to one of them. He was a God send that day, more than others, because when my mom pulled up to the house, he was already there. Thankfully, my brother was scheduled for a work trip and was arriving to Miami the next day.

Of course, during all of this, HR calls and I get my final offer. It’s honestly comical. I didn’t tell them anything at the moment, but I did know the person who was going to be my new boss. I called her and told her. Again, I got nothing short of support and compassion. I was even given the option to work from the Miami offices if need be. Later on, I did tell my new company, and they allowed me to start at a later date to be with my mom.

In the next three days, I quit my job, sold all my stuff, packed up my car and moved from Atlanta to Miami. My mom’s doctors had moved quickly, so her surgery was scheduled for Monday, August 3rd. She was going to have a radical hysterectomy.

I had no time to break down and cry, or process. I had to GO. But, had I wanted to, it wouldn’t have happened. My support system in Atlanta was so out of this world that had I tried to collapse, everyone would’ve held me up. Friends who helped me pack, who gave me a “mom” hug when I needed one, who took whatever stress they could off my plate, a friend from Orlando even flew up so I wouldn’t drive down alone. I was humbled.

I called it the “passing of the baton.” The day she got diagnosed, Ignacio carried the baton until my brother arrived Tuesday. He could only stay until the day before the surgery which is exactly when I arrived to take the baton to the finish line.

That Sunday, we had brunch together at our favorite Irish pub. All was normal. My mom was strong. Her faith is something that should be examined by NASA, because it’s out of this world. All three of us had an “Alright, let’s do this,” attitude.

Surgery day came, and again, we were surrounded with support. My best friend, Valerie, took the day off of work. My cousin’s mom, and his aunt, along with our other cousin, also came to the hospital. You know, you’re not really Latino unless you have an overabundance of people and volume at these things.

Surgery lasted three hours. When the oncologist came out, he gave us the good news. It looked like her surrounding organs were untouched. It was a tough first week of recovery, but my mom did what she always does, she kicked ridiculous ass.

A week and a half later, her pathology results were in. We got more good news – no further treatment needed. No chemo. No radiation. She even got the ok to fly so I could bring her with me to NYC to finish recovering. Hell, the doctor even said she could have a margarita! Naturally, we celebrated.

We were so lucky. We ARE so lucky. I don’t even feel like I could ever complain about this speed bump life gave us. I don’t even know if it’s right to call it a speed bump! My mom got diagnosed and cured in a week. Are we forever impacted? Yes. Did we get the good end of the bargain? Absolutely.

My mom later told me that when the doctor gave her the diagnosis, she didn’t believe him. Then, she said she had a flashback and saw my brother and I when we were small. Even then, she never shed a single tear. She said she knew God was testing her, and he’d get her through. Trust me, I know how unbelievable it is. 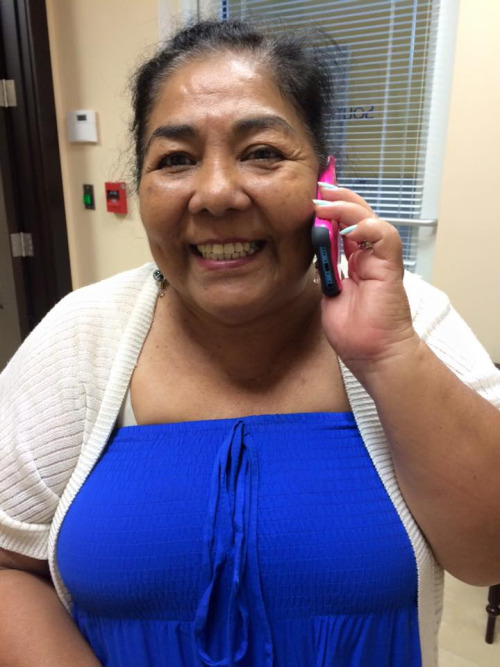 Belgica calling her son on the day she was told no further treatment was required.

I learned so many things from this experience with my mom. First and foremost, I was reassured and blown away by the rock solid strength my mother has. I’m also glad she’s diligent about going to the doctor. It is SO important! Early detection makes all the difference.

Secondly, my friends. From the support system in Atlanta, to the my support system in Orlando during my pit stop, to my family (blood and non-blood) in Miami. The friends who showed up to the hospital after working all day. The ones who brought us food. The ones who called. My always dependable “Faithful Four.” My former and current employers. Those who offered to help carry the baton if I had to move to NYC and my mom needed more treatment. All pride in your independence goes out the window in these scenarios, and it was good to know I have an army behind me.

Most importantly, I learned cancer doesn’t always mean death, but it does mean caution. I hesitated to write about this, because we all kept it personal for a bit. I’m not trying to get on a soapbox, but if you take anything away from this incredibly long post, it’s if your gut tells you something is wrong, go to the doctor! Exhaust all possibilities. That’s what my mom did. That’s why she’s still here.

One thought on “In My Mother’s Words: The Horribly Terrifying C-word”