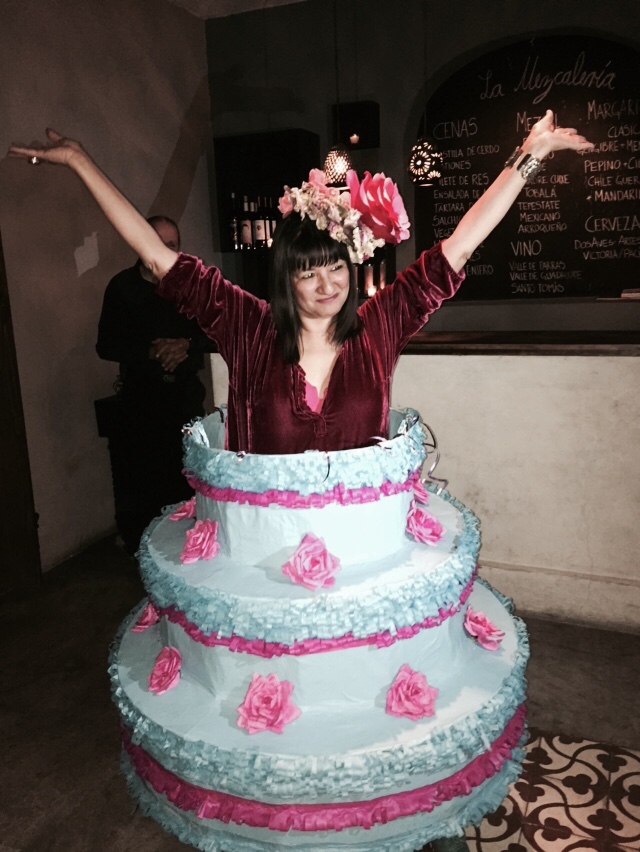 “I always wanted to jump out of a cake,” says Sandra Cisneros. (Photo/Tracy Boyer)

On a typical day, Sandra Cisneros likes to wake up gently, without an alarm clock, around 9:30am. She stays in her pajamas until 1pm, and then starts writing on her covered terrace until sunset, while surrounded by her five small dogs. Her peaceful lifestyle mirrors her delicate demeanor. 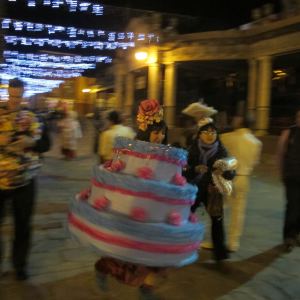 Sandra running on her birthday in Mexico. (Photo/Macarena Hernandez)

This past Saturday night, however, was a bit out of the ordinary. Cisneros went out on the town dressed up as a cake.

The award-winning author of several books, including “The House on Mango Street” and her most recent “Have You Seen Marie,” explains this behavior is unlike her normally introverted self, but she was celebrating an important milestone — turning 60.

“I have never felt younger or happier – now I can take care of me,” she says. “It’s a good time.”

The Chicago-born Mexican-American has always lived a very busy, even if quiet, life.

“I started writing when I was in middle school,” remembers Cisneros about how it all started. “I was in the Chicago Public Library looking through the card catalog. You could tell which cards were fingered more often than others. I was looking at a very soft dogeared card. I thought, ‘This book must be very loved.’ I wanted my own card to be loved and dirty from people touching it – from so many readers looking for it – it was very clear from a young age.”

She says she’s not sure she she chose her life-long career, but it found her.

“It was always inside me,” says the graceful Cisneros. “It was a way in dealing with my emotions. I didn’t have a way to handle all the stimulus before that. I didn’t see it as a career it was more of medicine.”

Cisneros explains that ever since she was a young child, she often felt overwhelmed by stimuli around her.

“I can’t go, to this day, to a supermarket,” she says. “I can’t filter things the way other people can. I didn’t realize that my experience was not common. My mom used to say I was a baby and used to make me feel bad. The only one who understood it was my father.”

She explains although she often felt like an outsider in her exterior world, she says she always had a rich interior world, and writing made her feel less lonely.

“When I don’t have art, my machine stops – it helps balance my life,” says Cisneros, who received her first national award by the time she was 30.

In addition to earning an MFA in 1978 and becoming an accomplished writer, Cisneros has held various creative writing teaching positions around the country, and founded two organizations that serve writers: the Macondo Foundation (now administered by the Guadalupe Cultural Arts Center) and the Alfredo Cisneros del Moral Foundation, which she recently closed down.

After struggling with her emotions throughout her life, she made it her mission to help students going through the same.

“I tell students – the ones that are sensitive – that they have a very important job to be artists,” says Cisneros. “It’s a wonderful thing, and someone needs to be able to translate that for those who cannot.”

She says her sensitivity has not diminished as an adult.

“I have to not be around a lot of people, except when I have to be,” says Cisneros. “I have to rest before I go in public…It drains me.”

After living nearly three decades in San Antonio, Texas, and the past two years in Mexico, Cisneros says she has finally sold her house in Texas and is looking for a new house to be based across the border — where she says she feels the most at home.

“Part of me living in Mexico is finding my retreat to be more private, and do more writing,” says Cisneros, who just finished writing a personal collection of stories called “A House of My Own,” which will be published in October 2015. “It’s all about finding what I need…I know my needs now that I’m older. I think i’m going to be traveling more globally and collaborating with different people. I want to grow.”

And what is the most important piece of life advice she would give her younger self?

“I would tell my younger self not to get so hung up on the men in my life,” says the author. “I had so many men in my life, and now I wish I had more, and I would not get all hung up on one. They are such babies. I didn’t find men who were very mature…You have to find someone where you are the beloved. That’s the only way to settle. Forget about the others. I always take their age and divide it by two. I need to find someone who is 100 years old!” [laughing]