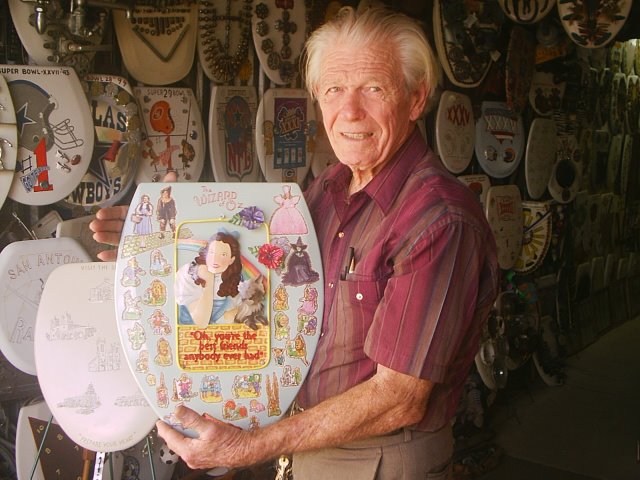 Barney Smith is a retired master plumber from Alamo Heights, Texas. At 93, he still treasures the trade that was passed down to him from his father by memorializing damaged toilet seats.

Every day, Smith goes to work in his garage to create art on toilet seats. He houses all of his works of art there as well, as he refuses to sell any. There are so many currently in his garage, that it is now known as the Toilet Seat Art Museum.

“Number 1,156 is the one I’m working on now. I’ve been working on it for several days,” says Smith who spurts out the toilet seat pieces by number, as well as the significance of each, with ease. “I have a catalog, but I have memorized many…”

Smith has made toilet seat art with everything from state license plates to sea shells. He gets inspired by experiences he wishes to remember, and the materials he has available at the moment. Sometimes visitors come by and bring him materials to work with. He says once he even had a visitor came from Seoul, Korea who stayed for three days.

“I get a bunch of stuff, and I say, ‘Okay, what am I going to do here?’,” says Smith, saying his latest project developed because a scooter club member walked in with a light bulb and some spark plugs.

Smith says joyfully that it takes him anywhere from 20 to 200 hours to completely adorn one toilet seat cover.

“It took me 200 hours to find rocks in the Rio Grande River and polish them,” remembers Smith as sharply as if it were yesterday. “My wife and I spent hours on those rocks. We went all the way to Laredo to try to find some pretty ones.”

He says he’s traveled a lot – from NYC (for appearances on “The Today Show,” “The View,” and “The Montel Williams Show”) to the Auschwitz concentration camps in Poland.

“I wanted barbed wire from the concentration camps,” says Smith. “I put it in my pocket and took it home, and put it on a toilet seat – that was in 1995. In 1996, we went to Germany and saw the Berlin wall, and all the way down to Austria. We saw the mountains from ‘The Sound of Music’…I picked up a rock and nail from the Berlin Wall and two flags, and I put a piece of the rock from one side of the wall, and the piece of barbed wire on a toilet seat. I’ve got a lot of history hanging up in the Toilet Seat Museum.”

Smith says he got the idea to use toilet seats as his canvas when he was still a plumber. He had gone to the plumbing supply house to purchase materials for a job and noticed a pile of slightly damaged toilet seats that were going to be discarded.

“I took about half a dozen toilet seats to my apartment,” remembers Smith. “I went back to the job, and when I got through that night, I started my artwork. I went back and showed the manager of the store what I was doing, and he told me I could have them all. So I had almost 50 seats to start out with.”

Until this day, Smith says he calls plumbing supply houses for damaged seats. Sometimes, people even bring them to him.

Smith says he gets so many visitors that he now only opens up by appointment only.

“I can’t afford to open up every time someone passes by in their car,” he says, taking his work seriously. “I got someone saying they want to come by this weekend from Georgia.”

Smith says he still has lots of energy to keep making his art, and if he is lucky to still be alive in May, he will be making his 94th birthday seat. 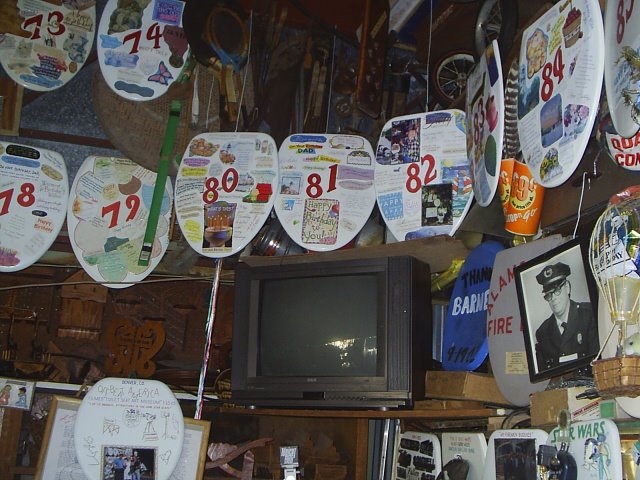 “I have two decades worth of birthday toilet seats,” says Smith, who tries to fit all of his birthday cards for each year on each birthday seat. He has three daughters, seven grandchildren, and 12 great grandchildren.

If he had one piece of advice to give his younger self, what would it be?