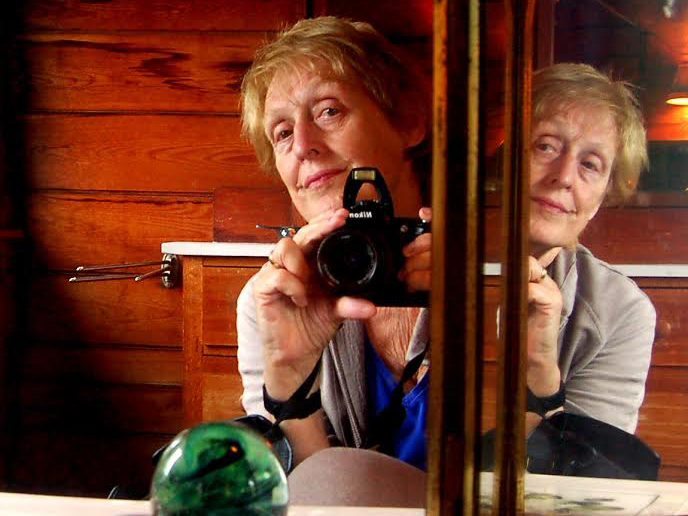 Carol Crawford, originally from Buffalo, NY, has been creating art ever since she can remember. She inherited her talent from her father – an artist and calligrapher.

“I used to watch him work,” she says. “He did gorgeous lines. He handed me a bottle of India ink when I was seven and a sable brush. I never spilled anything.”

And that’s how it all began.

Crawford has had a long art career consisting of documentary photography, filmmaking, printmaking, and theater set design. In 1995, she got a masters in interior design from Pratt Institute in NYC – where she has been teaching since 1999. Slightly before that, she also founded her own design firm, Carol Crawford Environments, which specializes in sustainable interior design. And on October 7, her latest exhibit, “Time Frames: Visual Metaphors for the Passage of Time” opens in New York.

“All the work was done in 2014,” says Crawford about her latest exhibit which she completed while on medical leave from Pratt. “I had spinal surgery, and it took a long time to heal. I thought I would go out of my mind, so I decided to throw myself into studio work. I plunged in. It was an evolution from designs from my sketchbook.”

She says what she loves most about art is the ability to communicate and to invent.

“What I like about it is telling stories,” says Crawford. “I’m looking always to break new ground. It’s mixed media, because I love to shift. I’ve used a lot of wood and plexiglass, and photography has always played a large part. I used to make a living as a documentary photographer – so the camera is an important tool.”

Whatever she has worked on throughout her life, she says, she has loved. And she also made sure to make time for everything that was important to her.

“I’ve been teaching in universities and colleges from California to Maryland for the past 60 years…I love teaching very, very much, but I didn’t want to give up the idea of becoming a mother,” says the busy woman who now has four grown kids and five grandchildren. “…One of the things I had to fight for was to have children and a family – so it means a great deal.”

Crawford says she wasn’t always so sure about what she wanted. One day her father asked her why she didn’t go to Pratt?

“We were not rich,” she remembers. “I was always a scholarship student with a job. I thought, ‘How could I do that?’”

And then her mother asked her, “Wouldn’t you like to be a designer? You keep doing it for free?”

Crawford says she didn’t know how she could go back to school with four kids, and she recently realized it all happened. She had actually graduated from Pratt and is a designer and teacher.

If she had one piece of life advice that she would tell her younger self, it would be to be true to yourself, others and stick to your dream – even if you don’t know how you are going to make money.

“If you haven’t already fallen in love with something…listen to yourself,” says Crawford. “If you are an honest observer to life around you, you’ll come up with something that is true to you. You will have success if you do that.”