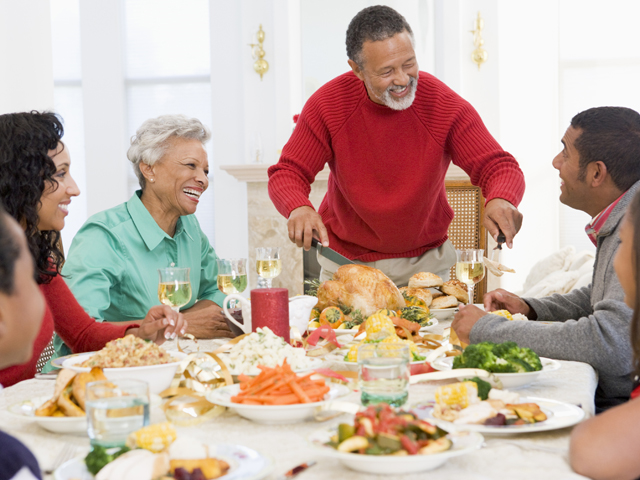 Traditionally, family meals have represented much more than just communal eating—they’re a time for good conversation and genuine family bonding.

Unfortunately, today, many meals are consumed at stoplights or in front of the computer—alone. Solitary dining has become more and more common as busy families are finding it challenging to carve out time for family meals, particularly when all adult family members work outside of the home.

A 2014 study found that the majority of American households eat meals together less than five days a week. A 2013 Harris Poll found that among Americans who live with at least one family member, only 58 percent report eating with others at least four times a week, but 86 percent report sitting down to a dinner together at least once a week. The poll also found that the frequency of family dinners is declining with each generation.Although solitary meals are occurring on a regular basis now, recent research suggests they are not contributing to you or your children’s well-being. Families that make an effort to eat meals together, at least three or four times a week, enjoy significant benefits for their health, happiness, and relationships.For example, kids who eat meals with their families enjoy healthier eating patterns and less obesity. Research shows that children who share family meals, three or more times a week, are more likely to be in a healthy weight range and make better food choices. They’re more likely to eat healthy foods and less likely to eat unhealthy ones. They are also less likely to develop eating disorders.Interestingly, a Cornell University study found that families (both adults and children) who eat dinner in their kitchen, or dining rooms, have significantly lower BMIs (body mass index) than families who eat elsewhere. For boys, remaining at the table until everyone is finished eating was also associated with a lower BMI.There is also something to be said about the importance of family rituals, and routines, for children’s emotional health. For example, teens who eat with their families at least five times a week are 40 percent more likely to get A’s and B’s in school than their peers who don’t share family meals. They’re also 42 percent less likely to drink alcohol, 59 percent less likely to smoke cigarettes, 66 percent less likely to try marijuana, and tend to be less depressed.

Other research shows that with each additional family dinner, adolescents have: higher self-esteem and life satisfaction, more trusting and helpful behaviors toward others and better relationships with their parents, better vocabulary and academic performance, lower teen pregnancy rates and truancy, and increased resilience to stress.In order for family meals to occur, you must make them a priority.

If you’re looking for ideas on how to corral your family into eating more meals together, The Family Dinner Project provides some helpful and creative tips.One of my favorite sayings is: “If you fail to plan, then you are planning to fail,” and this certainly applies here.

Making it possible for your family to eat together means not only shopping ahead of time so you have the food to prepare, but also selecting a time that works for everyone—whenever that may be. Just be creative and make your mealtimes as regular, stress-free and as enjoyable as possible!

Dr. Josefina Monasterio is a certified life coach, fitness expert, and nutritional counselor based in Vero Beach, Florida. She holds a PhD in Adult Personal Development from Nova University and a Master’s Degree in Education from Boston University. Dr. Josefina is also a certified Yoga Therapist from the World Yoga Society of Calcutta, India, and host of Healthy Power TV’s “The Dr. Josefina Way.”