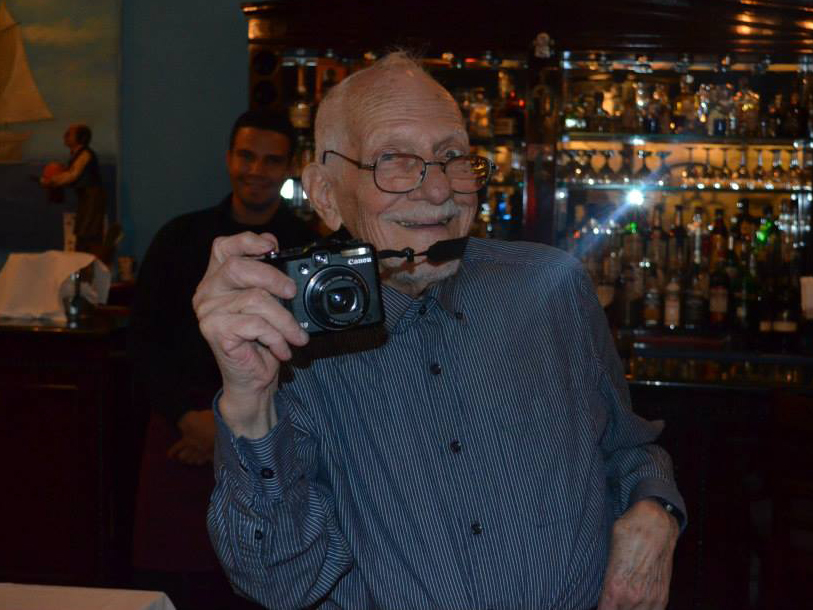 Nereo López isn’t a typical 92-year-old; he’s more like a typical young, starry-eyed artist who wakes up at noon and gets inspiration from everything around him. His small frame is overpowered by his bright blue eyes anxiously anticipating what is about to come next in his life. López has not only rediscovered his art, he has gotten a second chance at a successful career and fulfillment.

The Cruz de Boyacá winning photographer — one of the highest honors in Colombia — who had traveled the world taking photos, giving nearly 20 exhibitions, and published more than 10 works, saw his career plummet 12 years ago.  The man who met Gabriel García Márquez and Pope Paul IV had his center, the Nereo Center of Teaching and Culture of Photography in Bogota, Colombia, shut down due to lack of funds. He says after the age of 40, in Colombia, it is very hard to find work because you’re considered too antiquated.

López says he was having thoughts of ending his life when a friend called from New York. She heard the distress in his voice about not being able to find a job, and how he was feeling depressed, so she bought him a ticket to the city that never sleeps — arriving the next day — to see if he’d like it better. He says he didn’t just like it better, he found another reason to keep living.

“As soon as I arrived, I ran to all the photo galleries,” says López, describing his eagerness like a kid in an amusement park.

The title of his photo book published last year, called “Nereo López: Un Contador de Historias,” describes what he is precisely — a storyteller. He says there was a time he used to have 14 cameras of different sizes to tell his stories. Now, he just uses one to make his life simpler and lighter — a compact Canon G9.

“Photography still fascinates me,” says the man who one day started observing the faces of people leaving the subway and started a series of photos of just that. “What I have learned is to see.”

The talented López wasn’t always a photographer. He lost both parents at age 11, and started working when he was a teenager in a movie theater in Colombia, where he was promoted to manager after 10 years.

“It was World War II, and you couldn’t travel in a plane with a camera during that time,” says López, explaining how his photography career began. “A friend asked me to watch his camera while he went on a trip, and I started to practice with his camera.”

He says he learned on his own with a book and a correspondence course that he never finished, and he was always asking questions.

“I started taking photos in a series — like a movie,” he says. Still today, he says he’s always thinking in series — perhaps because of the many years of films he’s seen in the movie theater where he worked. “I always have my photos in my head, and I figure out what series they will go in later.”

When he was 27, he quit his movie house job, and started working as a photojournalist at one of Colombia’s largest newspapers, El Espectador. That is when he says he started to travel all over Colombia and started his photo collection for the book, “Colombia: Que Lindo Eres”/”Colombia: How Beautiful You Are.”

“The subjects I most gravitated towards were children,” says Lopez who also has a series called, “Niños Que No Rien”/“Children Who Don’t Laugh.” “Perhaps because I didn’t really have a real childhood.”

In 1957, he became a chief photographer of the photographer’s magazine, Cromos, in Colombia. He says he was a photojournalist for 15 years before he started his center of photography where he taught up to 100 students at a time.

Since he’s been in New York City, he has not wasted any of his precious minutes. He’s been recognized by the New York City Council and has shown his work at the Queens Museum and El Museo del Barrio.

“It hasn’t been easy, because I don’t speak English,” says López in his native Spanish.

He says he’s happy to not have to develop photos the old-fashioned way anymore. He’s well-equipped in his new one-bedroom apartment, in a building for the elderly, with bare white walls lined with varied books, including “Macs for Dummies.” The centerpiece of his living room is a shiny new 27-inch Mac computer, complete with scanner and printer. He explains he loves his craft even more now with modern technology.

“For me, paper is obsolete,” he exclaims, laughing.

One of the highlights of his week is going to a senior center in Queens, NY. Even though he moved to a different neighborhood, he still goes on Tuesdays, because that’s the day the seniors dance after lunch.

“To see these seniors dance and have fun is life,” he says, joking that no one is older than him. “They have a desire to live. I take photos demonstrating their desire to live.”

He says he would like to publish a book of these photos called ”La Primavera del Ocaso”/“The Spring of the Sunset,” but he’ll only do it if it can have that name. He also started making goals for himself again — to be featured in a large museum such as, the Museum of Modern Art in New York City, and to live in Spain and Paris one day.

“When I came to New York, I said to my friend, ‘I came to New York too late,” says López, eager to start on a new project with some young artists he’s encountered. “My friend responded, ‘You never arrive too late to New York, you just came with less time,’ but I hope to live 100 years more…I haven’t arrived to where I wanted to arrive, but I’m on my way.”

López says when he came to the U.S. and obtained his residency, and citizenship five years ago, he saw a new horizon.

“When one sees a horizon, one sees life,” says the photographer with never-ending vision. “Here is where I’ll stay.”

This article was originally published on NBCLatino.com on January 10, 2013.