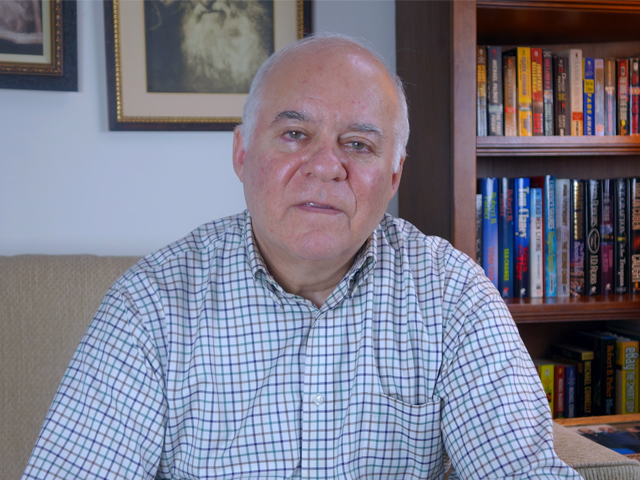 “When I was much younger, I wanted to be a chemical engineer, but as I got a little older, I guess my mind turned more towards business,” says Myron Gould, 68. “My father was a very big influence in that decision. He was a person who was in business…he was a role model in that regard…I would sit in the car and listen to him and listen to what was going on – it was interesting. He sold machine parts, adhesives, all material used by manufacturing firms.”

The born and raised New Yorker has worked four decades in the business and marketing arena. In addition to being the CEO of his own business advising firm, where he helps people build business plans, he is also starting a new consulting firm to teach companies to keep their employees engaged. Gould is also an adjunct professor of marketing and management at New York University.

“It’s my 20th year at NYU,” says Gould. “I was sitting in a friend’s office – a recruiter who dealt with direct marketing people…He got a phone call, and he said to the person on the phone, I have somebody right here. [The person] asked if I’d be interested in teaching a class, and I never stopped.”

And Gould never stops working it seems. In addition to running his business, he says he recently created a new capstone at the University – an option to writing a thesis for students which involves writing up a business plan instead and learning about entrepreneurship.

“I get a considerable amount of e-mails from clients, I grade papers, then I go through many projects that I’m working on,” explains Gould. “My classes are from 6 to 9 pm, and this coming term four times a week – it varies. I have dinner at 9:30 or 10:30, then work another four hours.”

He says he’s making an effort in getting more sleep, however.

When Gould was starting out his career in the mid-1960’s, he says marketing wasn’t even called “marketing,” but “distribution.” One of his favorite jobs was at Columbia Records in his early 30’s.

“It was a great place,” he remembers. “Sometimes I debate whether I should have left or not. I was recruited for a consulting firm.”

Today, he thinks video is the way to go. He uses green screen technology to create videos to complement his teaching.

“I have virtual sets,” says the high-tech professor, excitedly. “I can put myself into a green room…Like where a weather person delivers the weather. I create videos of some of my lessons and make them available for people…I can be doing my work while sipping piña coladas on a ship.”

What advice would he tell his younger self about life?

“I would talk about getting enough information to make good decisions,” he says. “A lot of times we make decisions impatiently, but sometimes it’s better to slow down a little bit. There were times in my life where I could have made a better decision by not acting so quickly.”

He adds his biggest project currently is getting his grandson, who just turned 4, to have a good life.

“What he does with his life is his choice, but I want him to be equipped to make those decisions,” says Gould.