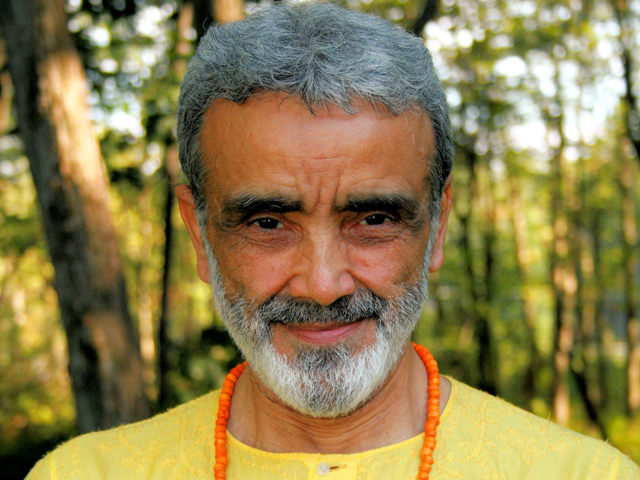 Sri Dharma Mittra near the lake at the Omega Institute in Rhinebeck, New York, August of 2009. (Photo/Lily Cushman Frindel)

While most New Yorkers are scrambling around, stressed, and in a hurry, Master Yogi Sri Dharma Mittra is often in a faraway, much more peaceful place mentally, and sometimes physically upside down.

Often referred to as the “Teacher’s Teacher” by his hundreds of students at the Dharma Yoga Center in New York City, Mittra has taught many prominent yoga instructors in the city since he began teaching the ancient art in 1967. Today, at 75, he still teaches yoga twice a day, five days a week.

“My favorite pose is the headstand, because the blood comes down to the head, and it increases mental ability,” says the yoga guru. 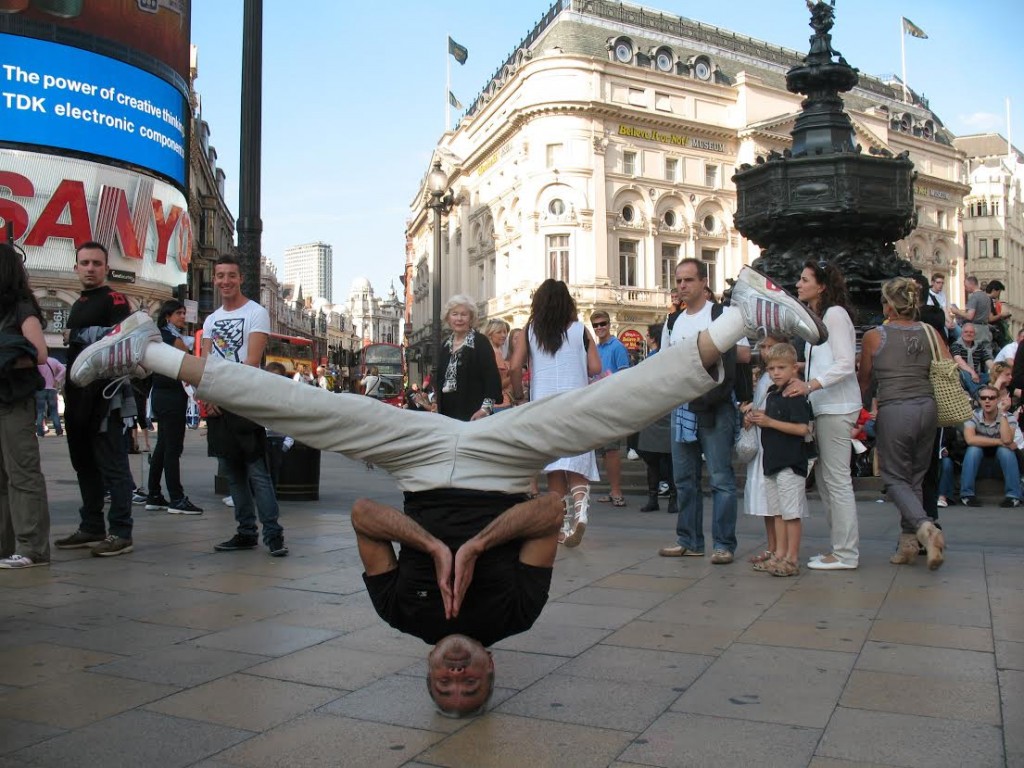 Sri Dharma in London, Summer of 2010. The pose is a variation of Nirlamba Shirshasana — a hands-free headstand. (Photo/Hugh Herrera)

Mittra is an expert in more than a thousand poses, however. When he was 45, he photographed himself in 1,350 postures as an act of devotion to his guru – Yogi Gupta. The Master Yoga Chart, which hangs in yoga studios worldwide, is made up of 908 of these photos. And, 608 of these photos were published in his book “Asanas.”

“I moved to New York City in September, 1964, and I lived here since then,” says Mittra who was born in the remote village of Pirapora, Brazil and was raised Catholic among a poor family of five children. “I came here for more opportunity…there is also more freedom here, and my guru was here, so I had to be here.”

He says he was around 17 or 18 when he learned about yoga through the books his younger brother was studying.

“As soon as I learned that the purpose of yoga was self-control, I got really enthusiastic about it,” remembers Mittra. “Yoga comes from about 5,000 years ago in India. Now, we have yoga styles that fit all types of people on the planet.”

He says he usually follows the form called Asana – the one based on postures.

“That technique gives you mental, physical and spiritual power,” says Mittra. “We use these three powers to achieve success in whatever we want. More mental control – your mind becomes extremely sharp…It is like going from AM to FM radio – better quality of music.”

Being a follower of Asana, requires Mittra to also be a vegetarian.

“Being a vegetarian, you rarely get sick,” he says. “I haven’t seen a doctor for 50 years. When you do the poses, your body doesn’t hurt much and you get less injuries.”

Mittra is also a champion of meditation – an integral component of yoga, he explains. He has been doing it for so long now, that it has become almost an involuntary habit for him.

“Meditation doesn’t mean you have to be sitting – you can be walking,” explains Mittra. “I also meditate lying down on the floor, but not sleeping. I put my body in a deep relaxation. Deep inside you ask yourself where you are in your heart, your mind, and you go outside of body consciousness. I keep my mind somewhere else, not on worries.”

For today’s youth, he advises them to have compassion for all beings.

“Learn how to see yourself in others,” says Mittra. “From there, you become more respectful… Form a good diet. Be vegetarian, and don’t cook food too much. If you don’t like yoga, you must be active. Be moderate in sex. Get involved in meditation. Without it, you won’t have inner peace.”